If you’ve kept up to date with my news or seen twitter, facebook posts or been to a gig recently you’ll have heard me talking about music in Austin, Texas and the trip I took recently.  Well, I’ve got lots to tell you about that so look out on the news page of the website.  Here on the blog I like to let you into my little world a little more!

Over the years I’ve heard a lot about the music in Austin and it’s scene, it’s affectionately called the “music capitol of the world”.  With my love of country music I’ve always wanted to visit Nashville, but never got around to it and as I’m not actually a country artist, I’m a lover of many different styles and I wanted to get things out of the trips personally too, I decided to head over to check out the music in Austin, Texas.  Don’t get me wrong Austin does have country music, I’m a long standing WIllie Nelson fan, but it’s also got a whole lot more!

That said it wasn’t actually music that led me to Austin, well it was and it wasn’t.  I could tell you the short version of the story, but I like the long version, it’s a nice story that also kind of fits with the qualities or “philosophies” if you like that I like to live by: Think Positively and Love Deeply.  Oh and trust, there’s a bit of that thrown in there too, with a sprinkle of intuition. 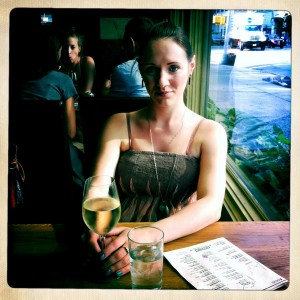 I love to travel.  I think for the amount of money you can spend on travel in comparison to formal education makes it certainly one of the best ways to learn and you especially learn things about yourself which is a bonus.  As a musician you get to travel lots but sometimes you don’t really get a chance to really see a place or speak to people.  Believe it or not music is work!  So, any chance I get to go somewhere ‘just because’, I do.  It was after I’d moved back to the UK having lived in Toronto and recorded “Change” out there that I decided to go back and play a few shows and at the same time do some showcase gigs in New York.  My then partner hadn’t been to either city so it was a great way to both feel at home and play tourist at the same time.  I love doing both the touristy things and living more like a local when I visit somewhere, you get the real feeling, especially cities.  During the last few days in New York, we decided to have a night at a venue I’d seen a few of my favourite artists had played at – City Winery.  Rickie Lee-Jones (of “Chuck-E’s in Love” fame) was playing there, so we bought tickets.  It’s a really cool place, a winery in the middle of New York with dining and music gigs.  My kind of place who know music and food go together beautifully 🙂  You are drawn in by the fresh feel and ambience and a friendly welcome.  I once spoke to an Italian after one of my gigs and he said music, food and wine shouldn’t be separate.  That said, Rickie Lee Jones didn’t agree, she wanted all the plates cleared before she made an appearance.  It gave us chance to chat to the people on our neighbouring tables.  The one thing I love about Americans is their ability to strike up conversation quickly.  One of the things I find creates harmony and safety for me in this world is not being a stranger to others and them to you, knowing your neighbours, your workmates, your postman even or the guy who serves you coffee every morning.  How many of us never strike up conversation or are scared to break the ice?  Asking questions and knowing who is behind the polite smile on the train in the morning is what creates connections to one another.  Now, not all of us are forthcoming with information, somehow we’re lost in a digital age and we’ll share over the internet through social media but we get protective and reserved when we offer up real information about ourselves in conversation, in fact some of us I find have lost the art of conversation.  Maybe you found this blog via facebook or twitter – when was the last time someone recommended a new blog to read through word of mouth?  When was the last time you spoke to a complete stranger?

Back to the story for now.  The obvious ice-breaker was to talk about the gig and the artist.  We weren’t really big fans, but we started talking to a group of women who were.  New York, being a destination city you’ll find lots of people who aren’t locals, so we exchanged where we were all from and we especially spoke to one woman from Austin, Texas.  Our conversation flowed really naturally as we are both the type of people who want to share positively.  What I mean by this is when you meet someone new without realising it you are creating connections with a sense of familiarity, something that already feels good and positive for you (of course it can happen the other way around!).  Immediately by naming another city you either have a connection or you don’t.  When she mentioned Austin, my other singer/songwriter friend popped into mind as she had just recorded there with her producer.  I mentioned that she was based in Toronto, Canada though.  My new Austin friend said “I know lots of musicians, who’s is her producer, I know a Canadian producer?”.  When I told her it turns out she actually knew him very well!

Talk about small world, there we were sitting in one of the biggest cities, us coming from the little old Midlands in England, her from Austin, Texas and we were connected by two musicians from Toronto, Canada, one of which she knew and the other I knew – how random!  We naturally said let’s keep in touch and she had very kindly offered a pair of strangers the opportunity to go and stay with her in Austin if we ever wanted to visit.  The Rickie Lee Jones concert was another experience in itself, what an artist, what a diva, but that’s a whole other story!!!

Time went on, I got busy with music and then I became quite sick in 2012.  I lost a lot of contact with friends both musically and personally and felt like there wasn’t a great deal of point to the music I was writing.  The place I was going to record at fell through and I basically lost confidence on my path.  So, just as easy as it is to build connections they can be taken away very quickly and thinking positively is something that’s even harder to do.  So instead, through that dense fog you see in front of you you have to trust, share, give love and you’ll almost certainly get it back.  I was for a while a little angry at the world, I thought I got ill through no fault of my own, but I really truly don’t believe all things come out of the blue.  Just like randomly sitting next to someone from Austin.  Now, getting “back on track” as they say can be hard, but sometimes that’s because you keep trying to get back on the track you were on before and moving forward, how I like to think of it means not always getting back to that same path, but instead creating new ones.

Next time you’re stuck in traffic and you really need to be somewhere try saying “I am always in the right place at the right time”, but don’t just say it, believe it.  Everything we need comes to us in time, as and when we need it.  So my friend and I hadn’t spoken too much since New York, but during 2013 I decided to make contact again, and things had changed for her too, but I decided to make a visit anyway because I thought if not now, then when?  She offered to let me stay and introduce me to a few musician friends.  But she did so much more for me than that.  I am so grateful that there are still people in the world who will go out of their way for you.  My family are this kind too, if you need food, a place to stay it’s not a problem!  I still think that no matter how much bad you hear about, the good still outweighs it.

I want to tell you all about Austin, Austin is awesome and they know it (not in a big headed way though!!).  The music, the food, the vintage shopping, where the traditional meets the liberal (!), the turquoise – everywhere!  Stayed tuned tot he blog to watch my Austin news develop, I’ve got more to tell you.  But for now I thought I’d leave you with a song I never perform because I sort of found it awkward, in some way it just doesn’t fit right with me.  A review of it once said “Who’s That Girl is an interesting song about how life sneaks up on us sometime. One day we might look in the mirror and realize suddenly how much older we look, or wonder where the person we’ve always been went.”

They wrote this like the song Who’s That Girl was auto-biographical, like the girl was me, I can see how that was confusing as I do say “I’m that girl”.  It wasn’t, just to clear that up!  It is actually written with a few girls in mind from my childhood and showing we’re all actually a little bit the same.  These girls though didn’t like people to be different or challenging, they liked conformity and conventional people (whatever that is!).  Asking who “that girl” is is about being in an awkward situation, faced with something or someone negative from your past and wondering if things have changed in all the years.  But, I love how people interpret songs as it is an obscure and vague one lyrically, so it’s open I suppose.  I hope you find that strangers, and being faced with them doesn’t have to at all be weird or awkward.  In fact it’s strange in itself that I write this blog now and connect the two together as Austin has it’s own slogan initially to promote independence and local business from a site that gives ‘A Guide to the Odd Side of Town’ and the slogan is “Keep Austin Weird”.

I hope you stay weird too and always question things, make connections and stay curious.