About a year ago I played a lovely venue in Digbeth, Fazeley Studios.  It was such a lovely atmosphere and evening and had some other great artists from the Birmingham music scene on.  It’s so good to hear that it’s back up and running so I’ll again be playing on the “Instant Karma” […]

April 6, 2014 by Shelly Quarmby | Comments Off on Instant Karma is back! 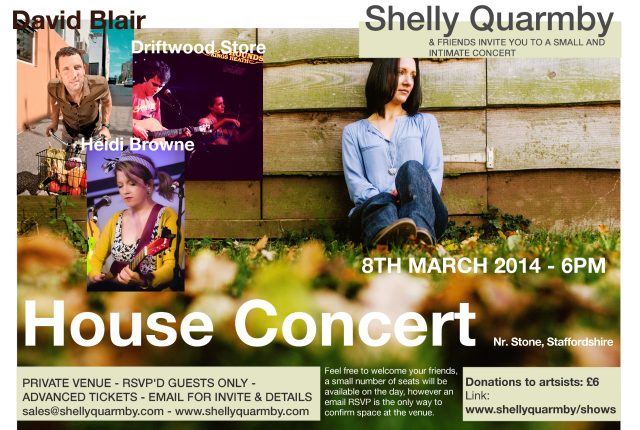 Thank you, thank you, thank you – to YOU the audience for being so supportive of live music in a living room! This was my first house concert and it certainly won’t be my last.  I am feeling a little smug at the artists chosen, as all your emails have been coming in saying how […]

March 10, 2014 by Shelly Quarmby | Comments Off on House Concert Success!

In around a month’s time I will invite Canadian Singer/songwriter David Blair to play a house concert here in the UK.  Vancouver born David Blair is currently living in Berlin and touring Europe and building his fan base there!  He has also just signed a deal with a German based record label. […]

February 2, 2014 by Shelly Quarmby | Comments Off on House Concert with David Blair